A favorite with all celebrating a special event – weddings, anniversaries, birthdays, business success, or a romantic getaway!

The Lord Leonard Calvert Suite offers a king-size bed, natural stone (gas) fireplace, build in bookshelves, ceiling fan it features a huge bathroom with a two-person jacuzzi, built-in champagne bucket, shower, separate private toilet, private Keurig coffee/tea, and a wet bar with a small fridge. Bathroom finishes are natural stone/marble/granite, European ceramic, and oak. The exclusive, south facing sunny private deck with roll-down awning, offers a panoramic view from sunrise to sunset through the forest which “filters” the views of and Chesapeake Bay and St. Jerome’s Creek, especially in summer. The total Suite, including the private deck, is a spacious 623 square feet.

In recognition of the quality stay in this and adjoining suites and rooms, occupancy shall be limited to no more than TWO persons, independent of age. 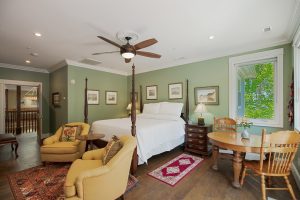 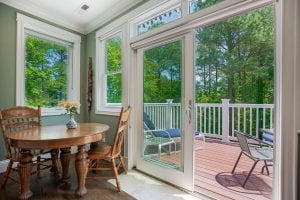 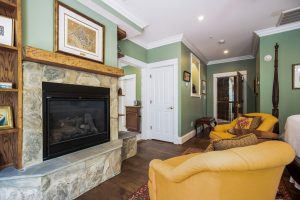 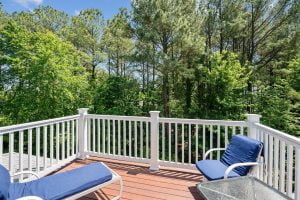 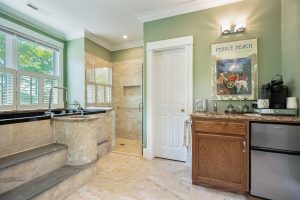 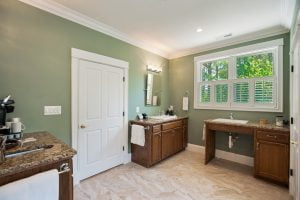 Lord Leonard Calvert, the son of George Calvert, the 1st Lord Baltimore arrived with “…17 gentlemen and their wives and about 200 others…” on the Ark and Dove in 1634. Lord Baltimore named him the first Governor of St. Mary’s colony and was granted Trinity Manor in 1634. He made Margaret Brent his legal representative and executor of his estate and named her and her bother Giles Brent Acting Governor on occasion. Under the mulberry tree at Church Point, having learned lessons from the James Town settlement, he worked out a peace and cooperation agreement with the Yacomico people, evolving from the feudalistic nature of the Grant to Lord Baltimore, he supported to establishment of a more tolerant and democratic form of government to the elected Legislature by 1638. Evidence of tolerance is found in freedom of religion, the welcoming of settlers from non-English settlers and the election of the first African to the legislature in 1641. Some in Virginia were hostile to the establishment of Maryland and its policies. In 1638 Governor Calvert, with active support of Giles Brent, seized the trading post on Kent Island from Virginia traders leading to conflicts until his death in 1647.