Swanendele Inn boasts two luxury suites named after the pioneers who played important roles in the development and history of St. Mary’s, MD. In 1639, the Brent’s, linear descendants of William the Conqueror, were granted the area on the Chesapeake south of St. Jerome’s Creek, where Swanendele Inn now stands. However, a deed was never registered due to political turmoil.

Lord Leonard Calvert, brother of Lord Baltimore, arrived at St. Mary’s on the Dove in 1634. He was named by his brother as the first governor of St. Mary’s colony and was granted the nearby Trinity Manor in 1634. He made Margaret Brent his legal representative and executor of his estate and named her Acting Governor. She is referred to as “the first suffragette” as she was the first woman to demand a vote in the Maryland Assembly.

When not rented as part of the Margaret & Giles Brent Suite this spacious room is available separately. The room consists of a large sitting room/bedroom with a queen-size bed, north and easterly sunrise views over St. Jerome’s Creek and Chesapeake Bay. The room offers a natural stone (gas) fireplace, ceiling fan, and bath facilities with a skylight. Bathroom finishes are natural stone/marble/granite, European ceramic and oak. The room adjoins the spacious common guest deck with unsurpassed views and providing space for socializing, a wet bar, coffee/tea station, and comfortable indoor seating. The total Room is 287 square feet.

Want Extra Space and Luxury?
This room can be booked in conjunction with the Giles Brent Room!  Add both The Margaret Brent Suite and the Giles Brent Room to your reservation. The two rooms are directly connected by interior, soundproof doors, creating a spacious Suite with two large rooms, one King and one Queen size beds, two bathrooms, two fireplaces, one double jacuzzi and a large private deck.  A 5% discount will be applied to the individual Suite and Room rate if booked together. 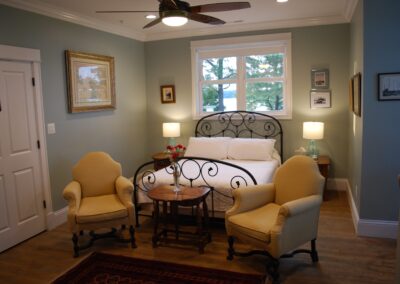 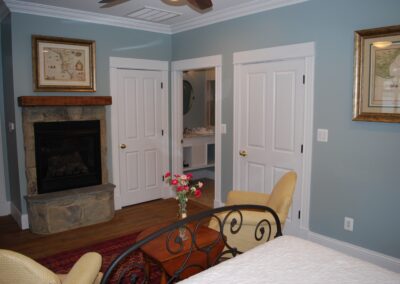 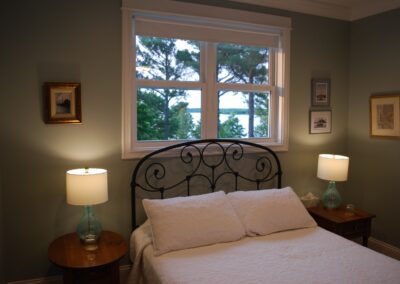 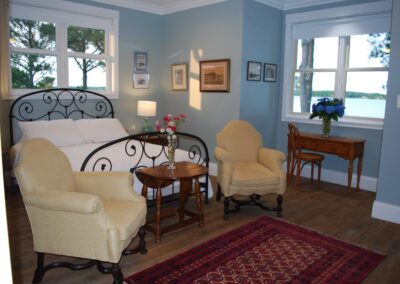 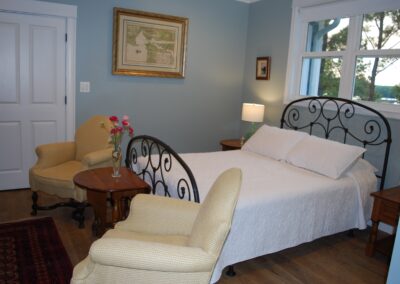 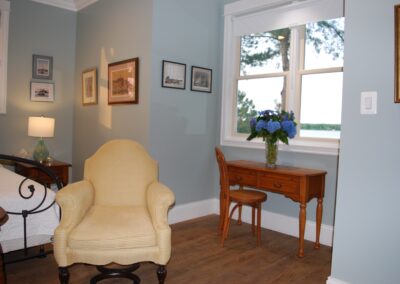 Complimentary multi course, warm breakfast served from 8 - 10am daily. Early breakfast by agreement. Monday “early bird special” for those leaving directly to work from 5:30 am.

Complimentary, help yourself coffee and tea are available at both the guest house and mezzanine wet bars. Each Suite also has a private wet bar and Keurig coffee/tea.

Complimentary parking for one vehicle per room conveniently located on site or immediate side-yard.

Enhanced wifi is provided by Atlantic Broadband and is generally accessible throughout the inn and grounds. The log-in details will be provided at check-in.

Check-in is after 3:00 p.m., earliest without prior arrangement. Check-out time is 11:00 a.m. We ask that you email us your approximate time of arrival within a one-hour time window and call 301-576-9910 as you turn on to Airedele Road so we can welcome you and assist with luggage.

We Are A Smoke-Free Facility

TOTAL – 100 percent prohibition on smoking or vaping indoors, including all outdoor decks. Smoking and/or “vaping” is permitted only in the designated area by the dock and fence where ash cans are provided.

The innkeepers reside on the premises to make certain that your experience at Swanendele Inn will be exceptional and memorable. Access to the “private” sections of the house is not permitted. You will always be able to reach one of us on the “duty phone” any time during your stay.

While accidents rarely happen, guests will be financially responsible for damage due to their negligence in the inn and on, or around, the decks or grounds. The parties agree that any controversy or claim arising out of, or relating to their stay, shall be settled by arbitration with St. Mary’s County, MD as the venue.